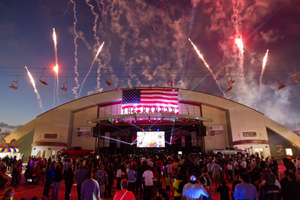 Disclosure:  I was contacted directly by representatives from the OC Fair who asked for my participation in sharing the news about the new Summer In The Cities at The OC Fair.  We’ve received complimentary tickets to the fair, however all opinions shared are my own.

This summer, the OC Fair is celebrating “community” with its new Summer In the Cities program with includes local entertainment, exhibits and discounts for residents.

On specific days, representatives and residents from cities in Orange County will lead Fairgoers in a Community Flag Salute and singing of the National Anthem at 12:30 p.m. in front of The Hangar. Also, residents of the featured city can enjoy discounted Fair admission with their Summer In the Cities coupon, available at their local city hall or library.

The 2013 OC Fair Summer In the Cities schedule is: