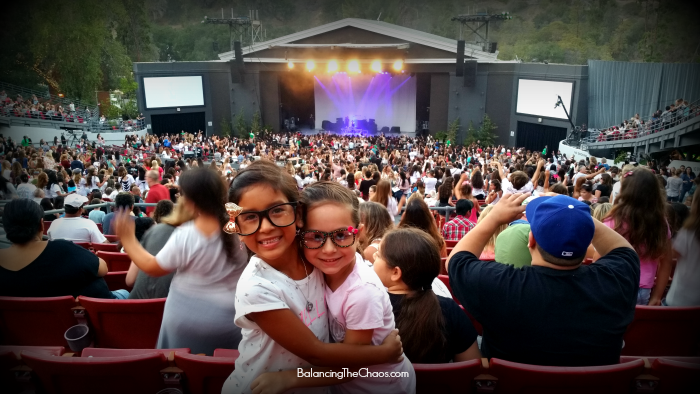 A few weeks ago my girlfriend and I had the opportunity to surprise our girls by taking them to The Greek Theatre to see R5. It was such a memorable night, the girls are still talking about it ALL the time!

It’s always fun to bring along friends to these special events we have the opportunity to attend, this being the girls’ first official concert ever. To start off the fun, we were invited to the Redwoods for a VIP party that included appetizers and drinks. It’s a great option of you have the option to purchase VIP tickets as it’s a great, relaxing way to enjoy the concert. AND you never know what celebrities you’ll spot.

If you haven’t heard of R5, it is a band composed of four siblings, Ross, Riker, Rocky and Rydel Lynch along with their friend Ellington “Ratliff”. The most recognizable artist of the bad is Ross Lynch, who stars on a hit Disney Channel show, Austin and Alley.  He can also be seen on the Disney Channel Original Movie Teen Beach 2, where he plays modern day surfer Brady.

The girls were super giddy when the had the opportunity to meet Garrett Clayton who plays Tanner from Teen Beach Movie and Teen Beach 2. They were so nervous about talking to him, the just stood on the stairs and stared at him. They also giggled when he said hi directly to them, I’m surprised they didn’t scream. Eventually they got up the courage to snap a photo with him.

The U.S. tour of R5 featured special guests Jacob Whitesides and Ryland. The kids and us moms truly enjoyed both as we were up singing and dancing through most of the concert.

A special thank you to our friends at Nederlander for treating our girls to an incredible evening. It truly was a girls night to remember!

Led by vocalist/rhythm guitarist Ross Lynch, R5 came together in 2009 and is comprised of Lynch’s siblings Riker (bass/vocals), Rocky (lead guitar/vocals) and Rydel (keyboard/vocals) and friend Ellington “Ratliff” (drums/vocals). R5 has rapidly emerged as an exciting new voice in the world of pop rock. For more information, please visit www.R5Rocks.com

One of the excursions we took on our Disney Merryt

While cruising, the FOOD was fantastic. It is the