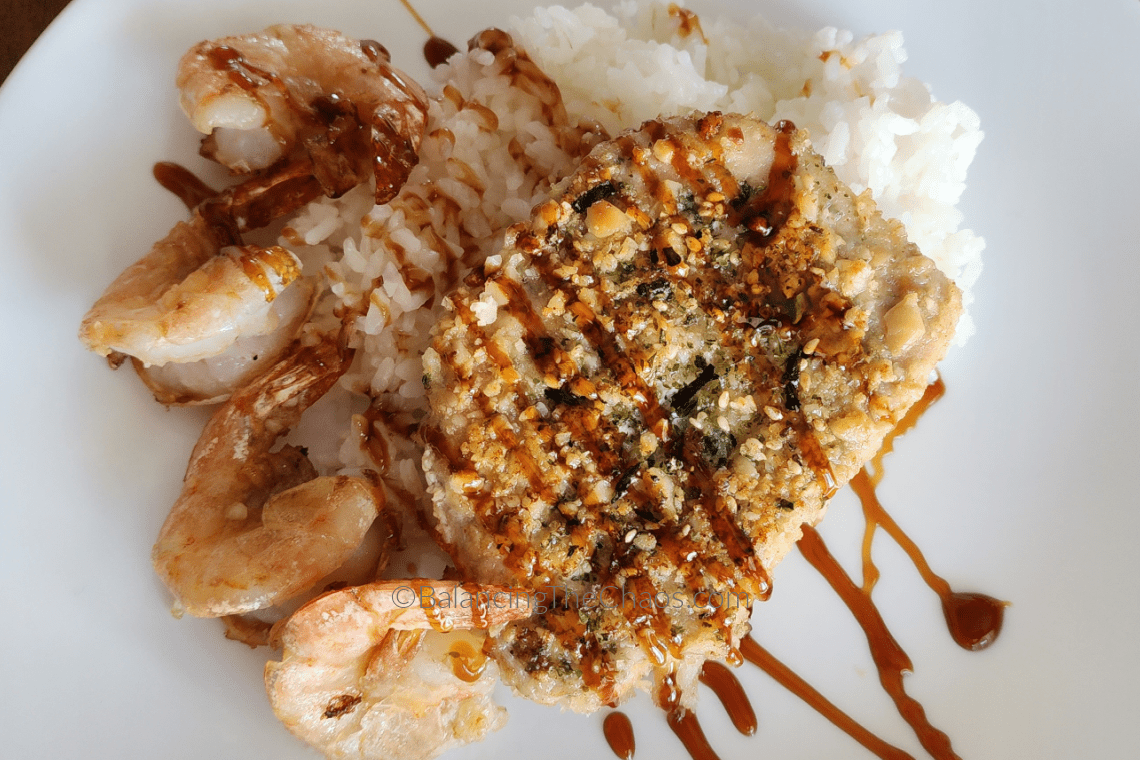 While the weather is finally starting to cool down as we get closer to Fall I was trying to come up with a quick and easy meal that the entire family might enjoy. If you’re like us, you have a few picky eaters in the bunch. This easy Macadamia Nut Crusted Tuna with Shrimp was a hit with our finicky eaters.

It is Family Meals month at Smart & Final, and in partnership with my favorite grocery store, I stocked up on some necessities. For dinner this week, I decided we were going to incorporate fish into our diet, rather than our staples of chicken, fish, and pork. In their frozen section, Smart & Final has a selection of frozen fish like yellowfin tuna steaks, tilapia, and a few others. They also have several varieties of frozen shrimp that I like to grill up as an entree or even smaller portions for an appetizer.

After finding the yellowfin tuna steaks, I decided I was going to try my hand at a macadamia nut-crusted recipe, and add in asparagus and some green onion for a garnish and flavor.

I started off preparing the rice. In my family, with my Japanese background, I was raised on Calrose Rice. Typically, we have huge containers full, but since I was in a hurry and out of rice, I grabbed the Smart & Final smaller portion bag that I discovered in their fresh nut and coffee aisle in the store.

At home, I started with the rice. I rinsed the rice and set it in the small rice cooker to cook. Typically, it takes about 25 minutes to prepare the perfect sticky rice.

Once it was chopped up fine enough, I placed the tuna steak in it, hoping it would stick. Naturally, it didn’t stick to the damp fish, so I ran to the pantry and grabbed flour. I dabbed the tuna steak with a paper towel, lightly coated each side with flour, and then, dipped it back into the macadamia nuts. I felt it still needed a little more, so I added one of my favorite seasonings: Furikake which has flecks of seaweed, sesame, and additional spices.

I melted roughly ¼ cube of butter and placed the macadamia nut-crusted tuna in the pan for about 4 minutes on each side. While it was browning up, I also added shrimp to the pan as well.

When it was finished, I platted the macadamia nut-crusted tuna on a bed of the sticky Calrose rice and added a few pieces of shrimp, and lightly drizzled some Unagi Eel Sauce that I had in my refrigerator.

This was such a quick and easy dish, I think it is one we’ll add to our regular dinner rotation. Next time, I’m hoping to change it up and add a few more flavors.

One thing to note, I had all intentions of adding a vegetable to this dish. I think it would be amazing with asparagus as I had planned. However, as things go, I was in a hurry, and completely forgot about it since I had to prepare the dish on the fly between a football game and dance rehearsals. So, if you try it out, please share your alterations, I’d love to hear suggestions!