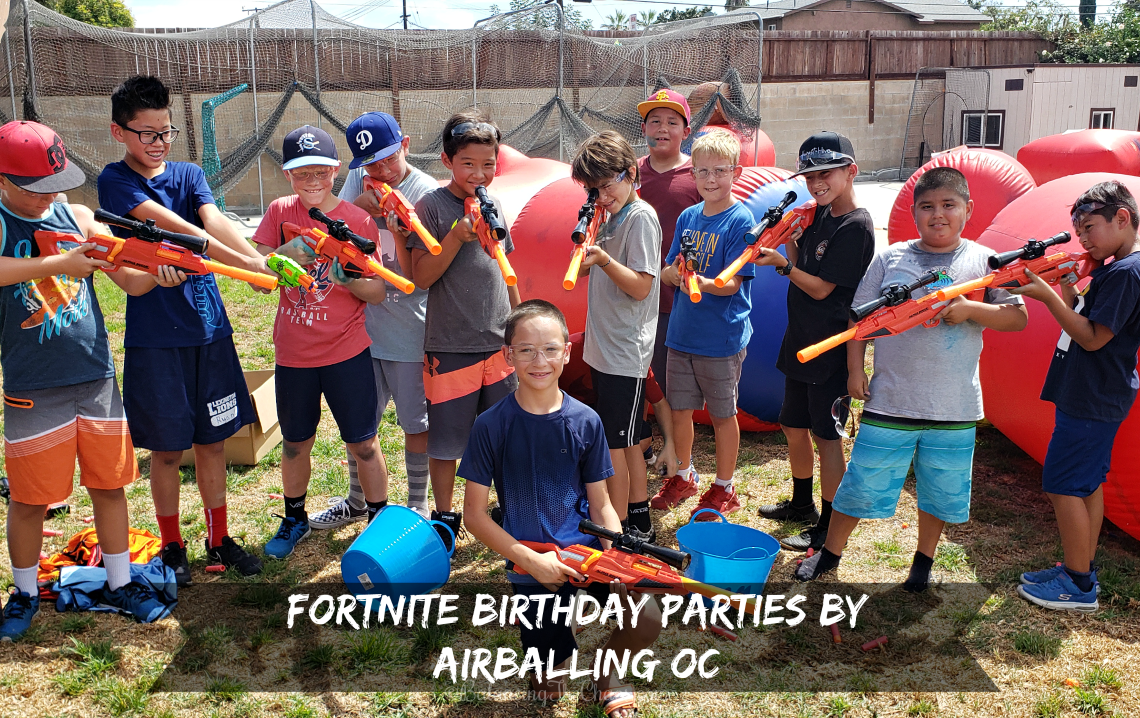 With my son’s birthday just around the corner, I have been looking for new ideas on how to make this upcoming party unique for him and his friends. With the current Fortnite craze, being able to re-create this interactive video game has been a request for his birthday party theme. While decorations are fun, Air Balling OC has created an opportunity to bring these types of parties to a whole new level. Kids are going to go nutty with the opportunity to recreate their favorite video game in a real-life, interactive event.

While researching party themes, Airballing OC contacted me about their new concept and wanted to know the best way to share the info with families like mine. During my research, I asked my son how he would feel about being able to play one of his favorite games, in the real world, rather than virtually connecting with 2-4 of his friends. As I expected, he was “all in” and excited about the possibility of a live version of Fortnite. So I began my research….

How do they do it? Well, first of all, you need a BIG space. Apparently, they highly suggest an outdoor area that’s as big as 3-4 basketball courts. Yes, this is where we have the stumbling block. You’ll need to check with local parks, gyms, etc, unless you have a large backyard. If you’re in South Orange County, they suggested Lake Forest Sports Park. Once you have your location ironed out, then you’re on to the next step.

So once you have a location and date secured, they real planning begins. As the host, it is simple – figure out what your hungry guests will want to eat, because you know they’ll be starving after battle! For Airballing OC, they do the rest. They bring all of the Fortnite Birthday Party elements that makes the event come to life.

Players are encouraged to use the combination of these two sizes to create a dynamic and diverse battlefield that allows players to get innovative in their game play.

Kid Friendly Weapons (Its All nerf):

Nerf guns are the selected artillery that is used in Airballing OC’s Fortnite parties. Three types of weapons are used:

The final touches to bring the game to life include the huge Human Hamster Ball that is used as part of the battlefield and other objective game play, and then the additional add ons.

Doesn’t this sound like an amazing time for the Fortnite obsessed kid? Like I said, mine is “all in”. So we decided to go ahead and start planning. I’ll let you know how the event turns out soon. In the mean time, here are the details on how to contact my friends at Airballing OC. Website: https://airballingoc.com/

Update! We had an Airballing OC Fortnite Party!

This weekend we hosted a Fortnite Birthday party with Airballing OC, and it was so much fun! The kids had a blast, and couldn’t stop talking about the event. Here are some important details you need to know:

Ready to plan your party? I’ve got a discount code for you! Use BALANCINGTHECHAOS to receive 10% off your Airballing OC Fortnite Party.