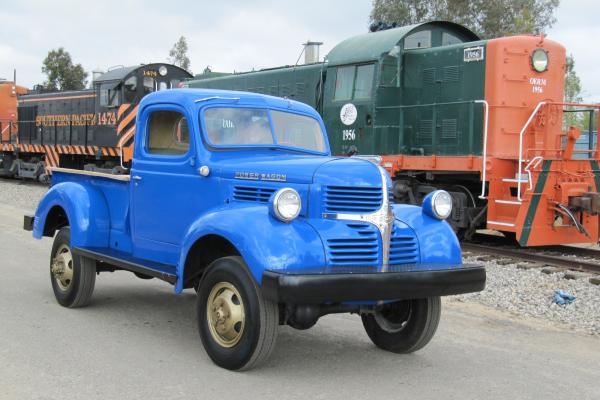 Does your little guy LOVE cars like mine does?  On Sunday, May 5th, the Orange Empire Railway Museum is hosting an Antique Truck Show.  This one-day special event at the heritage railway park in Perris, CA, will feature hundreds of restored, vintage trucks — from semis and pickups to delivery vehicles, fire engines and farm equipment – in addition to rolling locomotives and street cars.

About Orange Empire Railway Museum
Orange Empire Railway Museum at 2201 South A Street in Perris operates a Museum Railway where visitors can ride on the historic trains and trolleys that helped shape the Southern California we know today. The Museum Railway operates every weekend and on most major holidays from 11 a.m. to 5 p.m., and also on weekdays for charters and other special events. The Museum grounds are open every day from 9 a.m. to 5 p.m. with the exception of Thanksgiving and Christmas. Visit www.oerm.org or phone (951) 657-2605.

About American Truck Historical Society Southern California Chapter
The ATHS So. Cal. Chapter was organized and chartered June 5, 1982, with ATHS past President Rolland Smith as one of the founders. The group has grown from a handful of truck-loving members to now being over 150 strong. The Southern California Chapter encompasses an area from Santa Barbara in the North to San Diego in the South and from the West coast to the Arizona border. The majority of members call Los Angeles, Orange, San Bernardino and Riverside Counties home.