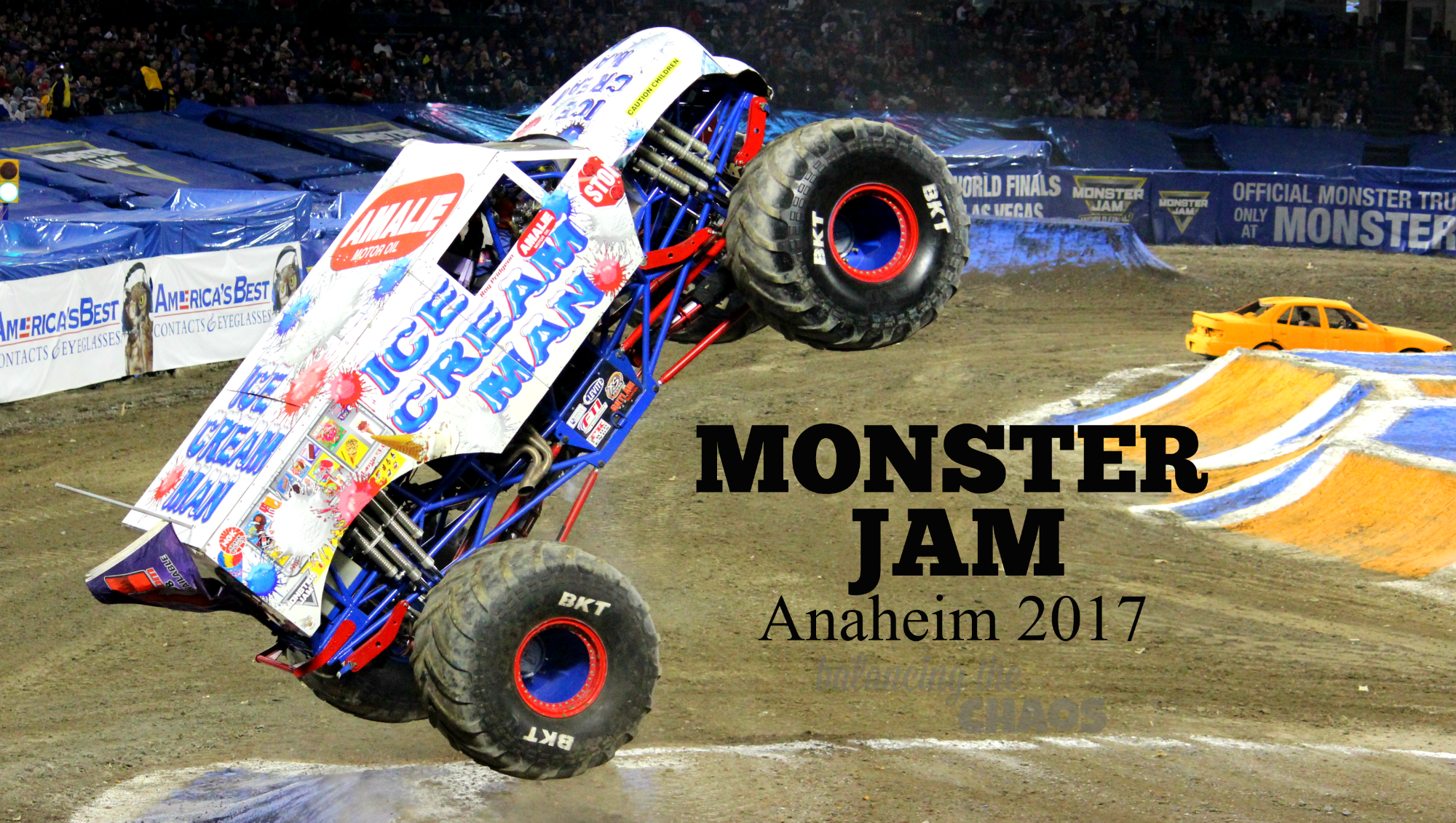 There’s still time to see Monster Jam and meet the monster truck drivers at this year’s Pit Party. This adrenaline packed, high flying stunt show with destructible demolitions and more has two exciting days left – February 11th and February 25th. If you haven’t had a chance to see it this year, grab your tickets and pit passes! You’re not going to want to miss this event as 7 trucks have made Anaheim debut appearance: Hurricane Force, Raminator, Xtreme Diesel, Jester, Over Board, Xtermigator and Storm Damage and you’ll still have time to catch them.

Monster Jam starring the biggest performers on four wheels: Monster Jam trucks! We went over the weekend and had an exciting time at the pit party, watching the motorcycle, and cycling demonstration as the fearless riders were flying high over families. 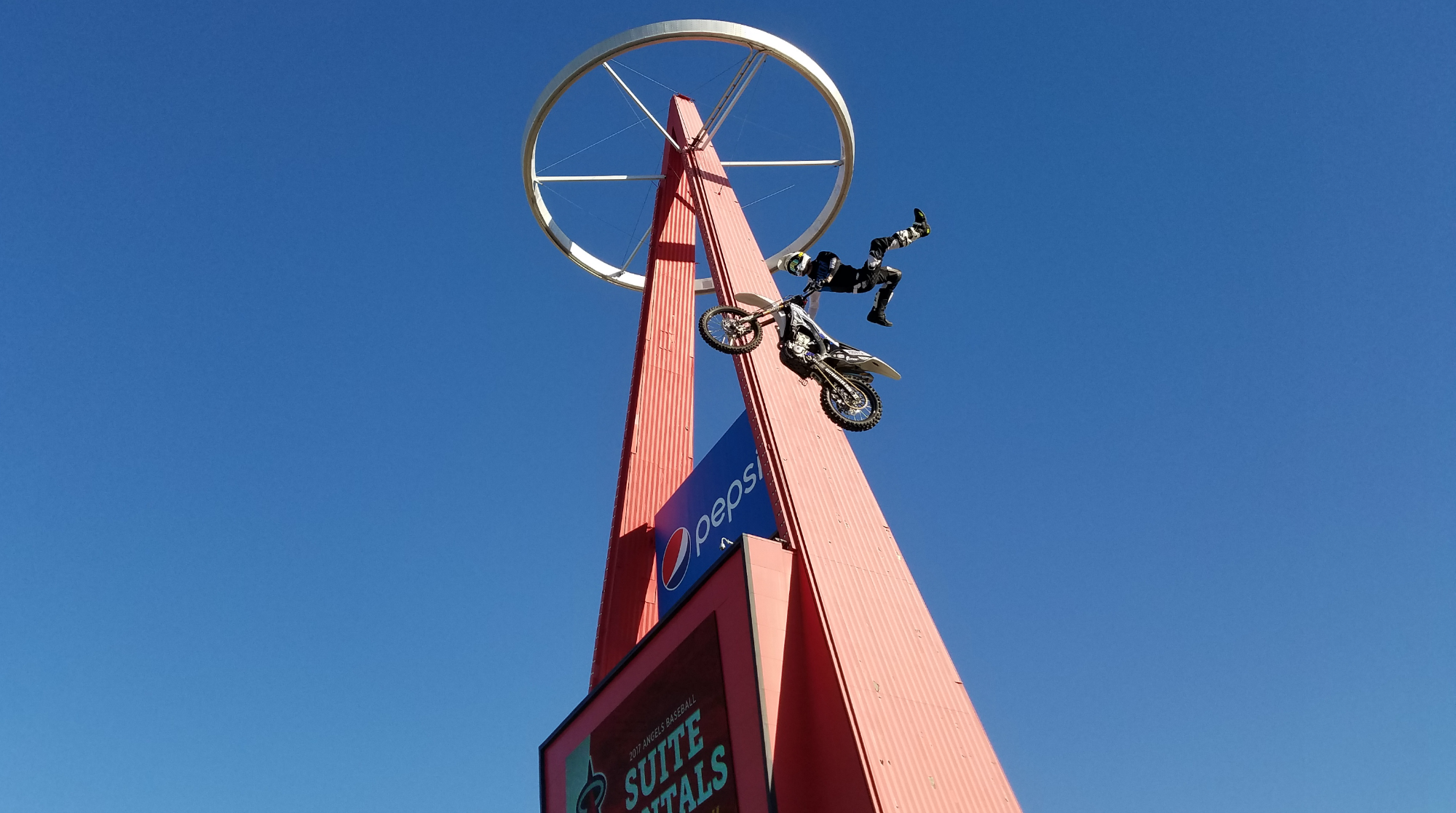 For $10 a person, families can enjoy getting up close to the Monster Trucks and meet their drivers. My son and his friend got a kick out of meeting each driver and asking for autographs in their 2017 Monster Jam Souvenir book. 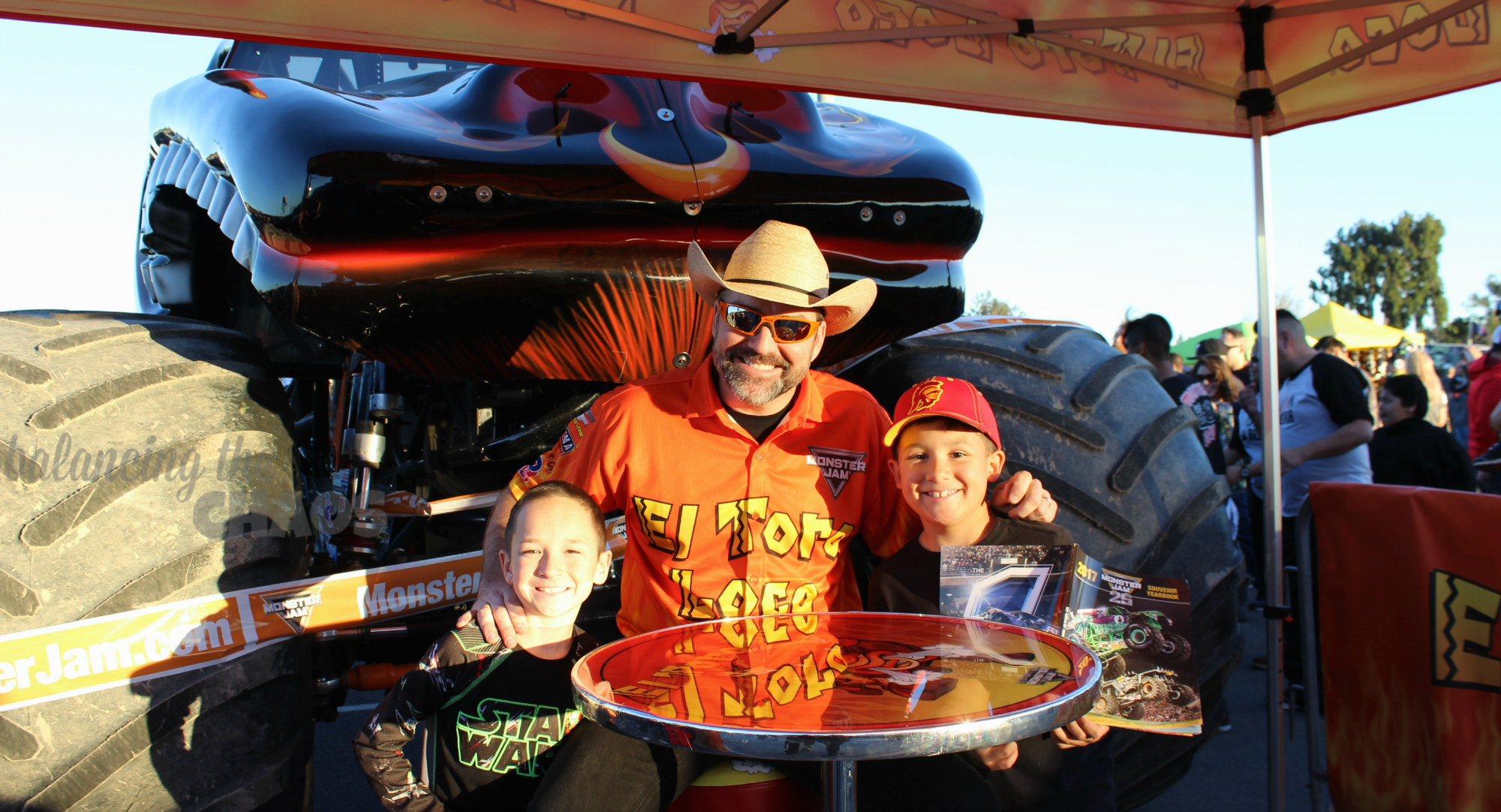 This year’s massive truck lineup features appearances by Monster Jam powerhouses and multiple World Finals Champions Grave Digger® and MAX-D™, along with World Finals super-trucks El Toro Loco®, and Bounty Hunter. Highlighted by 7 trucks making their Anaheim debut appearances including Hurricane Force, Raminator, Xtreme Diesel, Jester, Over Bored, Xtermigator and Storm Damage. We were so excited to see our favorite trucks. The kids and I were in a battle to see if Max-D or El Toro Loco would take the champion ship! This year we had so much fun with all the excitement. Four of the giant trucks attempted the 360 and three of them made it through. Even in the races, we saw two trucks roll in the same race! Something we had never personally seen. These drivers were out for blood. 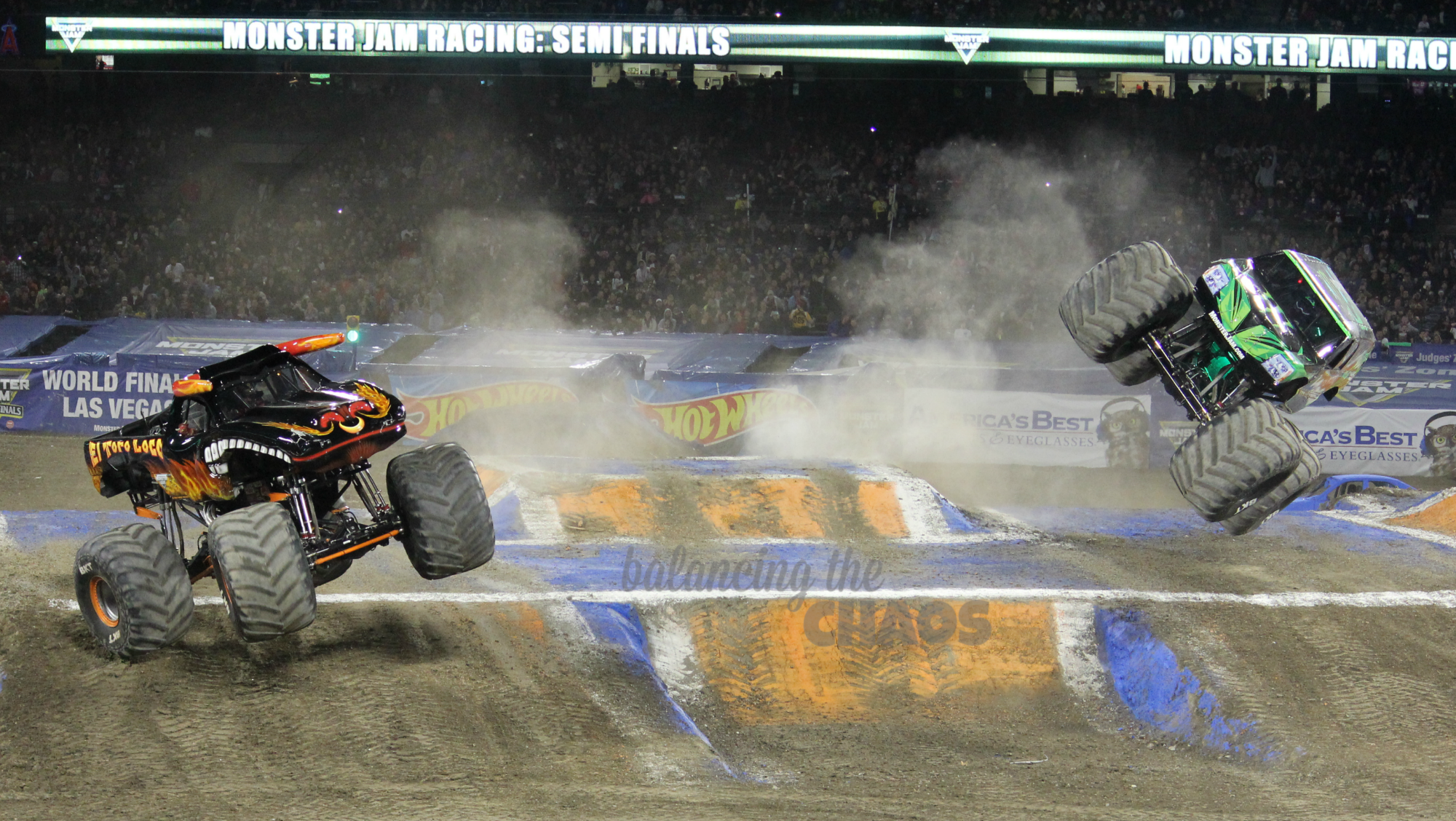 Monster Jam 2017 isn’t just for the boys. This year, Monster Jam is featuring the ladies with the most ever professional female monster truck drivers in the history of Monster Jam. Anaheim will feature four female drivers; highlighted by the youngest ever female driver (19 year old Rosalee Ramer driving Wild Flower). Plus, the first-ever female driver “Queen of Carnage” Madusa will be making her final Anaheim appearance ever at the Feb. 11th Pit Party event as part of her Monster Jam Farewell Tour.

The Pit Party 2:30pm – 5:30pm (Event Ticket and Pit Party pass required):
Start the day right at the Pit Party. Monster Jam fans will have a chance to get up close to most of the Monster Trucks in Monster Jam 2017. The trucks and riders enjoy greeting their fans, posing for pictures and signing autographs. 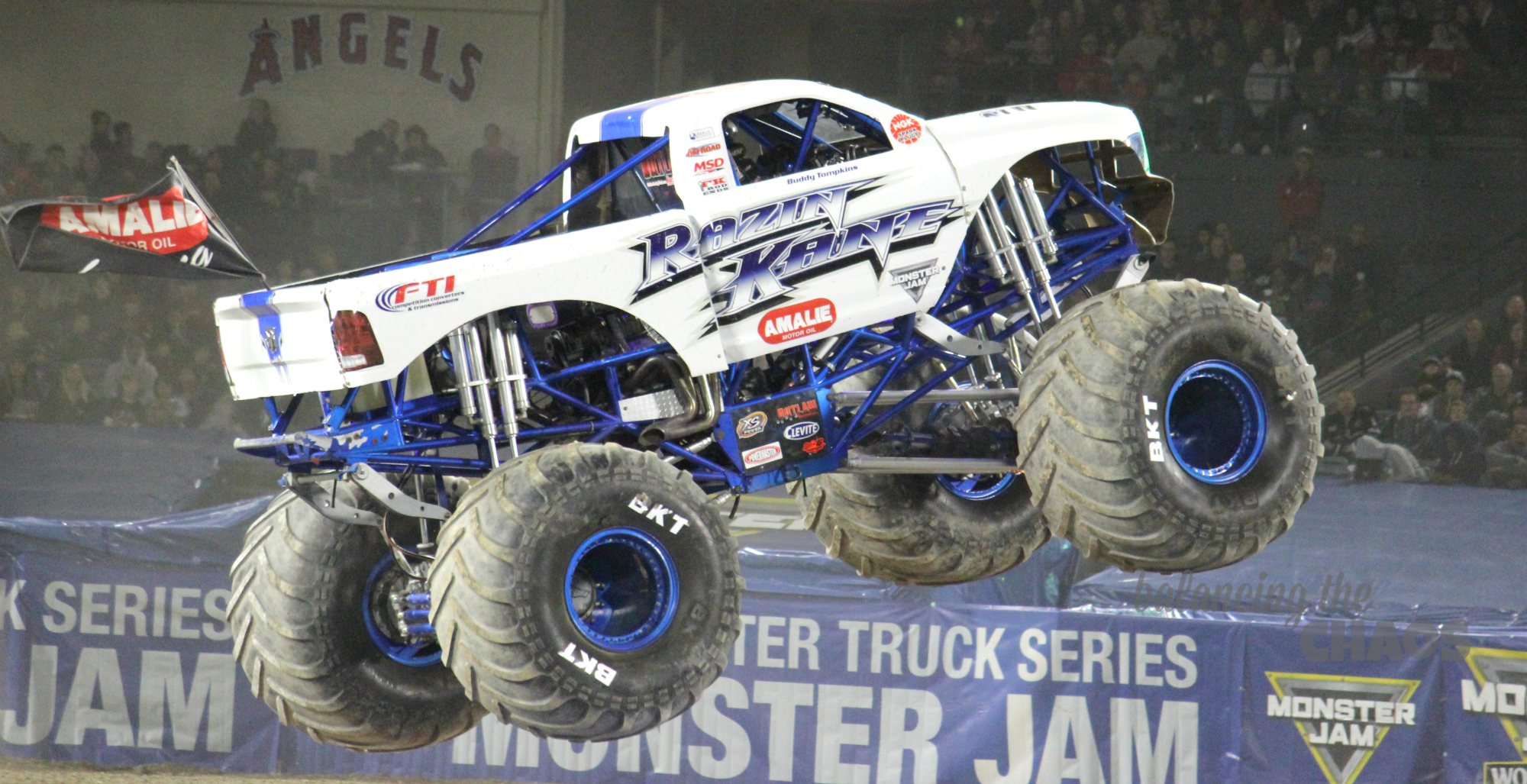 Helpful Tip: You’ll want to protect little ears because the engines are quite loud, leaving your ears ringing long after the show. Pick up either noise cancelling headsets or ear plugs from your local hardware store.