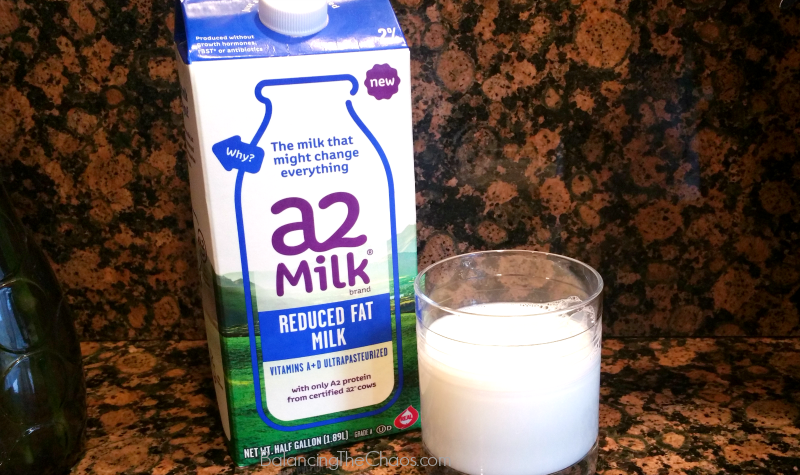 “This post was sponsored by a2 Milk® as part of an Influencer Activation for Influence Central. I received complimentary products to facilitate my review.”

I absolutely LOVE milk! I can drink it daily! But there are many people who have ‘self diagnosed’ themselves as lactose intolerant because of tummy troubles. I know of several people, including my mom, who have mentioned stomach issues with even just a half a glass of Milk and suffer through Post-Dairy Digestive Discomfort immediately after, who really need to try a2 Milk®.

I’ve recently been introduced to a2 Milk®, and am excited to share that I’m an ambassador for the a2 Milk Company™. In an independent study, approximately 1 in 4 Americans have upset stomachs or experience discomfort after drinking milk; however only 3-4% have actually been clinically diagnosed with a lactose intolerance medical condition. That was quite surprising to me. With that many people suffering, why aren’t they making a change? Maybe they have no idea that it’s the milk they are drinking causing their discomfort.

This week I decided to test the family and switch out the milk they had been drinking with a2 Milk®. The kids gobbled up their cereal just like every morning – they didn’t notice the difference.

Once they were off to school, I decided to try it out for myself, and I really liked it. Now I must admit, I do not suffer from digestion problems, however I like the idea that this is a better option for us. I’ve had friends recommend coconut milk, or soy milk, but I just don’t enjoy the flavor. Then I discovered that  a2 Milk® contains approximately 6x the amount of calcium as soy beverages, approximately 8x the protein of almond beverages and approximately 6x the potassium levels of rice beverages. That’s a win/win in my book.

Back in the day, original, pure milk, contained the A2 protein or A2 protein (beta-casin). Over time, as herds of cattle were brought to the US, cows had to adapt to the stresses of migrating along with the changing conditions of modern dairy farming and an increase demand of milk. The A1 protein began to appear in the milk supply. Slowly people who drank began to have dietary issues because it is harder to digest the A1 protein.

The a2 Milk Company™ has partnered with U.S. family dairy farmers in upstate New York and the Midwest to expand the heirloom a2™ herd that naturally produces milk free of the A1 protein. These cows are cows are fed a vegetarian diet and are never given hormones or rBST, and the milk is antibiotic free and contains no artificial ingredients or additives. Now we’ll have the ability to purchase a delicious pure milk without chemicals harmful to our bodies. Lucky for us, a2 Milk® is currently available at our locals Ralphs market. Try it for yourself and tell me what you think.
For more information about a2 Milk® and a2 Milk Company™ visit https://a2milk.com/ or connect with via social media: Facebook, Twitter.