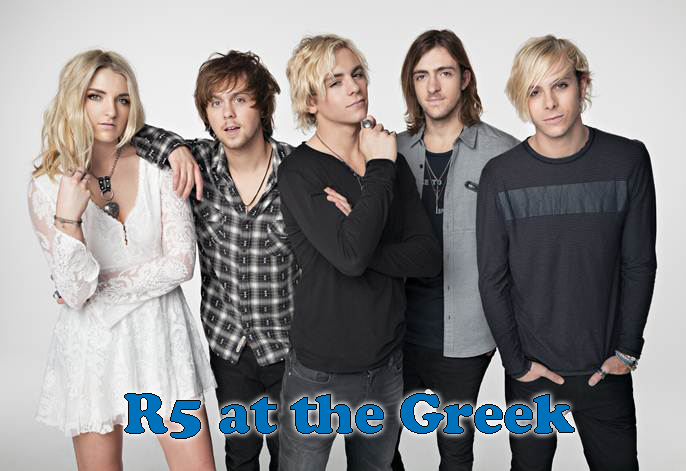 Have you heard? R5 has recently announced the upcoming release of their sophomore album, “Sometime Last Night”, and a major U.S. summer headlining tour of the same name that will be stopping at the Greek Theatre, LA on August 23 and we’re giving away tickets! 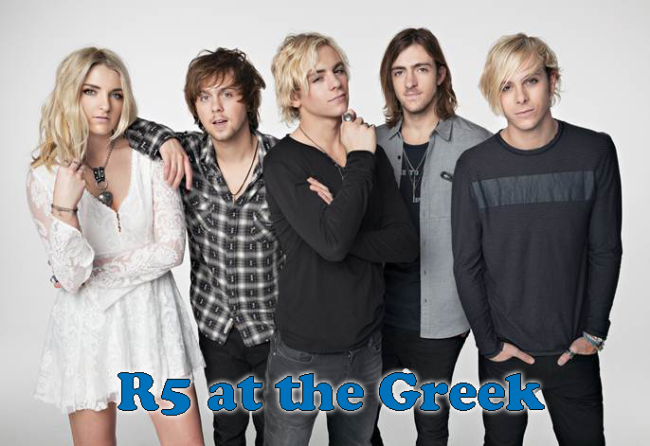 R5 is composed of four siblings, Ross, Riker, Rocky and Rydel Lynch along with their friend Ellington “Ratliff”. If you and your kids are fans of the Disney Channel, they’re probably already fans of Ross Lynch, who currently stars as Austin Moon, on Austin & Ally, where he recently won his third consecutive Kids’ Choice Award for Favorite TV Actor for his role on the show. He can also be seen on the Disney Channel Original Movie Teen Beach 2, where he plays modern day surfer Brady.

The U.S. tour of R5 features special guests Jacob Whitesides and Ryland. “We can’t wait for our fans to see what we have in store for them this summer,” said the band. “Playing such amazing venues has always been a dream of ours and we’re so
excited to have our fans be a part of it.”

Led by vocalist/rhythm guitarist Ross Lynch, R5 came together in 2009 and is comprised of Lynch’s siblings Riker (bass/vocals), Rocky (lead guitar/vocals) and Rydel (keyboard/vocals) and friend Ellington “Ratliff” (drums/vocals). R5 has rapidly emerged as an exciting new voice in the world of pop rock. For more information, please visit www.R5Rocks.com

Enter to win a family Four Pack of tickets to see R5 on August 23rd at 7pm.

Giveaway ends August 18, 2015 at 11:59 PM PST. Open to US Residents 18 and older only. Prizes cannot be shipped to PO Boxes. Winner will be selected at random and be notified by email. Winners have 48 hours to respond before a new winner is selected. Not liable for unclaimed prizes or fulfillment. Blog has represented each sponsor with the expectation they will fulfill their prize and in a timely manner. No purchase necessary to enter or win; however you must enter for a chance to win. Purchase does not increase chance of winning. Chances of winning depend on number of entries. My opinions are my own and were not influenced by any form of compensation. Facebook, Twitter or any other social media platform are in no way associated with this giveaway. By providing your information in this form, you are providing your information to this blog. I do not share or sell information and will use any information only for the purpose of contacting the winner. Winners can only win once per month. Not liable for unclaimed prizes or fulfillment.