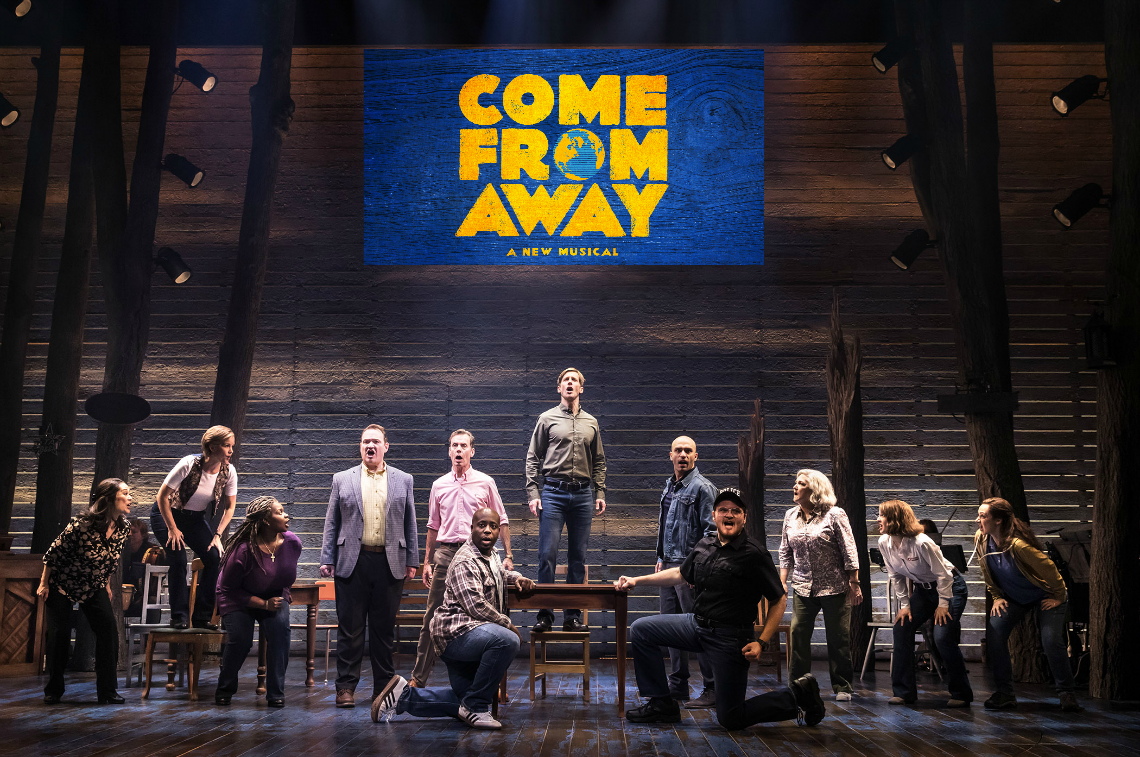 The September 11, 2011 attacks shook the entire world to its core. The world stood still as the the chaos unfolded. Earlier this week, my daughter and I attended the premiere of “Come From Away” at Segerstrom Center for the Arts in Costa Mesa . This show is the longest Broadway running show in Canada, and it is no surprise because this unique musical is sensational!

This incredible musical is based on a true story that took place Gander, a small town in Canada.  This story gives audiences a glimpse in the week following the September 11th attacks, and what transpired when 38 planes were ordered to land unexpectedly in this remote town.  The characters in the musical are based on (and in most cases share the names of) real Gander residents as well as some of the 7,000 stranded travelers they housed and fed. During “ Operation Yellow Ribbon, “cultures clashed and nerves ran high, but uneasiness turned into trust, music soared into the night, and gratitude grew into enduring friendships and even romances.

We laughed,  we cried, and the music moved us. This show has seamless song and scene transitions, and there was no intermission.

The extraordinary performers flawlessly changed voices, accents, and sang harmoniously in sync. We were blown away with their insane talent, and versatility.

Don’t miss this breathtaking new musical written by Tony® nominees Irene Sankoff and David Hein, and helmed by this year’s Tony-winning Best Director, Christopher Ashley. This astounding show is a MUST-SEE and runs through February 17th at Segerstrom Center for the Arts.

Angela is a Latina lifestyle influencer and mom of 4 with a passion for the arts, good food, culture, fashion and travel.  She is an Orange County native and loves exploring Southern California and beyond. For more inspiration and a snippet into Angela, check out her blog at https://queenbeelatina.com/

Disclosure: Thank you Segerstrom Center for the Arts for inviting us to see “Come From Away.” All opinions are my own.

About Segerstrom Center For The Arts:

Segerstrom Center for the Arts is an acclaimed arts institution as well as a beautiful multi-disciplinary cultural campus. It is committed to supporting artistic excellence, offering unsurpassed experiences and to engaging the entire community in new and exciting ways through the unique power of live performance and a diverse array of inspiring arts-based education and community engagement programs.
Previously called the Orange County Performing Arts Center, Segerstrom Center is Orange County’s largest non-profit arts organization. In addition to its six performance venues, Segerstrom Center is also home to the American Ballet Theatre William J. Gillespie School.