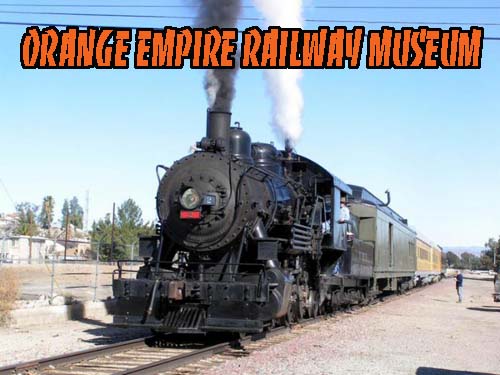 Have your little ones ever had the opportunity to ride a real steam locomotive?  They’ll have an opportunity to do just that Febuary 15th and 16th at The Orange Empire Railway Museum during Steam Weekend.

Act now to reserve your seats on a real steam locomotive. Youngsters can see the world through a chugging train going wooooo? Bring the entire family to:
Steam Weekend at
Orange Empire Railway Museum
Feb. 15-16, 2014
Kids and train buffs alike can  ride behind the powerful VC #2 and learn how a steam engine works.   With an All Day Ride Pass, you can ride the steam locomotive, a diesel powered train and vintage trolleys for the entire day. Great family fun for kids of all ages.
The event runs February 15th and 16th only from 9:00am – 5:00pm.  Admission is Ages 12 and up, $12.00, Ages 5 – 11, $8.00, 4 and under are free.
For directions and ticket information,
visit www.oerm.org or call  (951) 657-2605.
Connect with Orange Empire Railway Museum via Social Media:
Website, Facebook, Twitter

The Orange Empire Railway Museum is an all-volunteer organization that has been preserving Southern California’s railway history since 1956. The museum’s mission is to educate the public on the technology, history, and impact of the rail transportation industry in the West. Over 200 rail cars and locomotives, ranging from Los Angeles street cars to modern diesel locomotives, are preserved at the museum’s 100-acre site in Perris, California, which is open 363 days of the year.