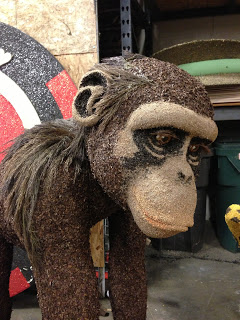 Growing up, I remember waking up each New Years Day morning and running to the couch to watch the Rose Parade with my mom.  An annual tradition, we’d eat breakfast and be completely lost in the flowers and the splendor of the floats.  I recall one year when we spent the night at my grandparent’s house in Pasadena, woke up early and headed out to the parade route.  I think I must have been around 7 years old, the year we sat on the curbs of Pasadena with millions of strangers, enjoying the Rose Parade.  I wondered what it would be like to decorate those floats, and thought, “someday, I hope to do that”.

Well, this year was the year that dream came true.  In December, I blogged about getting the opportunity to be a part of the Dole Family Day, where we got to see the beginnings of their parade entry.  What a thrill it was to be included in this special event, and have the opportunity to talk to some of Dole’s representatives.
Seeing the Dole float in person, I wanted to get involved.  I spoke with Monica, a marketing representative from Dole regarding about my desire to volunteer as a float decorator.  I found out that they were having a Dole Employee Decorating Night and said she’d email me the specifics. 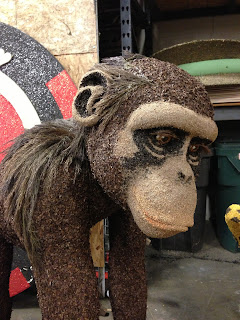 As a decorator, I was told I needed to commit about 6 hours specifically for decorating.  At that time, I didn’t know what else was entailed when I invited my mom and mother in law (they too had dreamed of decorating a float).  We headed off to Fiesta Floats late in the afternoon full of anticipation and excitement.

It was the 28th of December, you’d think that there were people frantically working away at decorating, however, it was a very fun, casual atmosphere at Fiesta Floats.  At that stage, the float was assembled, and decorators and florists were working on small details.  We spoke with the coordinator and he directed different groups of people to work on smaller, more detailed sections of the float.

Happy to participate, my mom, mother-in-law and I put on our Dole shirts, rolled up our sleeves and dove into applying tacky glue to corn husks.  The glue, stinking to high heaven, was so sticky, we began to get stuck to EVERYTHING!.  Thank goodness we came prepared with the beautiful green latex gloves seen in the picture.  (The Dole shirts helped save our clothes!) 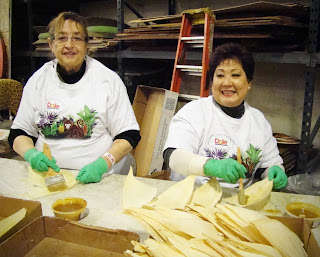 With the 3 of us eager to help, we quickly covered 50+ husks, but they were stacking up and we were running out of room.  We later learned that the corn husks were being used to cover the palm trees on the float.  Because of the location of the trees “Camera Side of The Float”, one decorator was assigned to cover all tree trunks, in order to make them all look identical. We were told to meet outside in a tent between 6pm and 8pm. Perfect timing since we were at a corn husk standstill.  Excited they were catering dinner from Bristol Farms, we ventured out into the cold…. 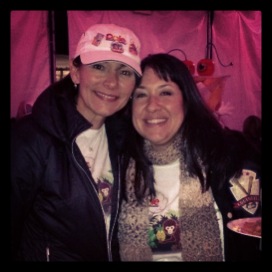 I must say, Dole does it up right for their employees.  A beautiful dinner, fun festive atmosphere, and even the Dole Fruit Cup was there to entertain the employees. After an amazing dinner, we headed back into decorate. With so many volunteers, we were running out of areas to work on.  See, the flowers really need to be put on the float in the day or two before being judged, that way, they begin to open up in time for viewing the morning of the parade. 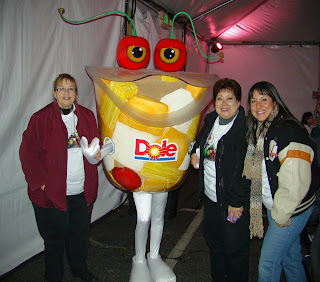 Here are some specifics we found out from the project coordinator: 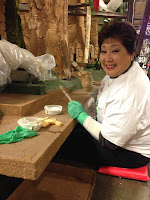 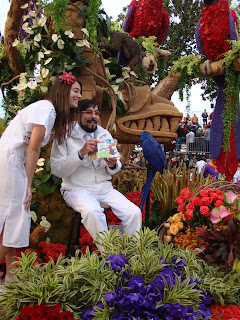 While decorating, I was delighted to be given 2 tickets to see the parade from bleacher seats!  Dave and Monica from Dole really made this an amazing experience by inviting us to see our final product and enjoy in the special festivities they had planned for those who were going to attend.

Continental breakfast was provided for all members of Dole that were in attendance of the Rose Parade, along with invitations to the celebration party at Stony Point Bar and Grill in Pasadena. 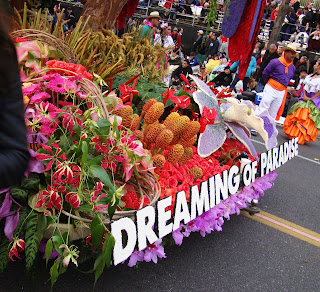 Congratulations to Dole Foods for winning the Sweepstakes Trophy 3 years in a row.  And to Fiesta Floats, for winning “sweeps” for 19 consecutive years. 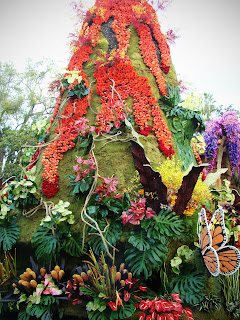 Special thanks to my new friends at Dole, for making this an amazing experience for me and my family!
And it truly hits home, being a part of Dole, since my Grandmother and Great Uncle are both a part of the Dole family having worked at the Pineapple Factory on Oahu, Hawaii.  My Grandmother, one of the many dedicated workers to sorted through conveyors  of produce to make sure Dole represented only the best pineapple and Uncle, who delivered product to local stores. 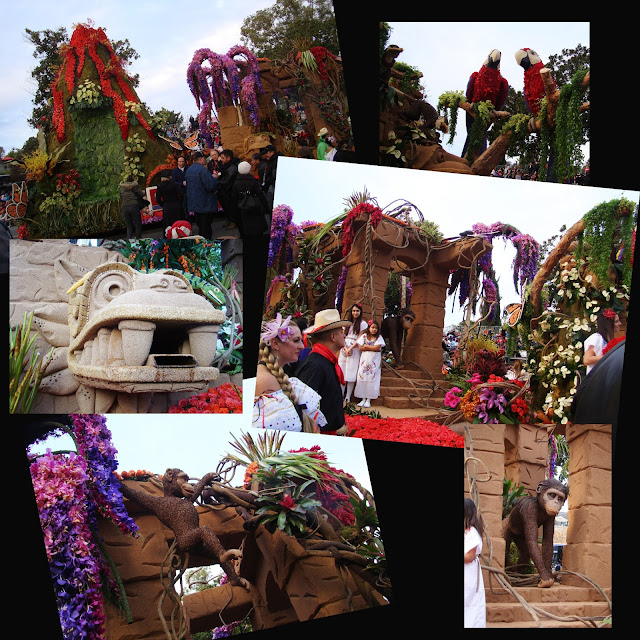