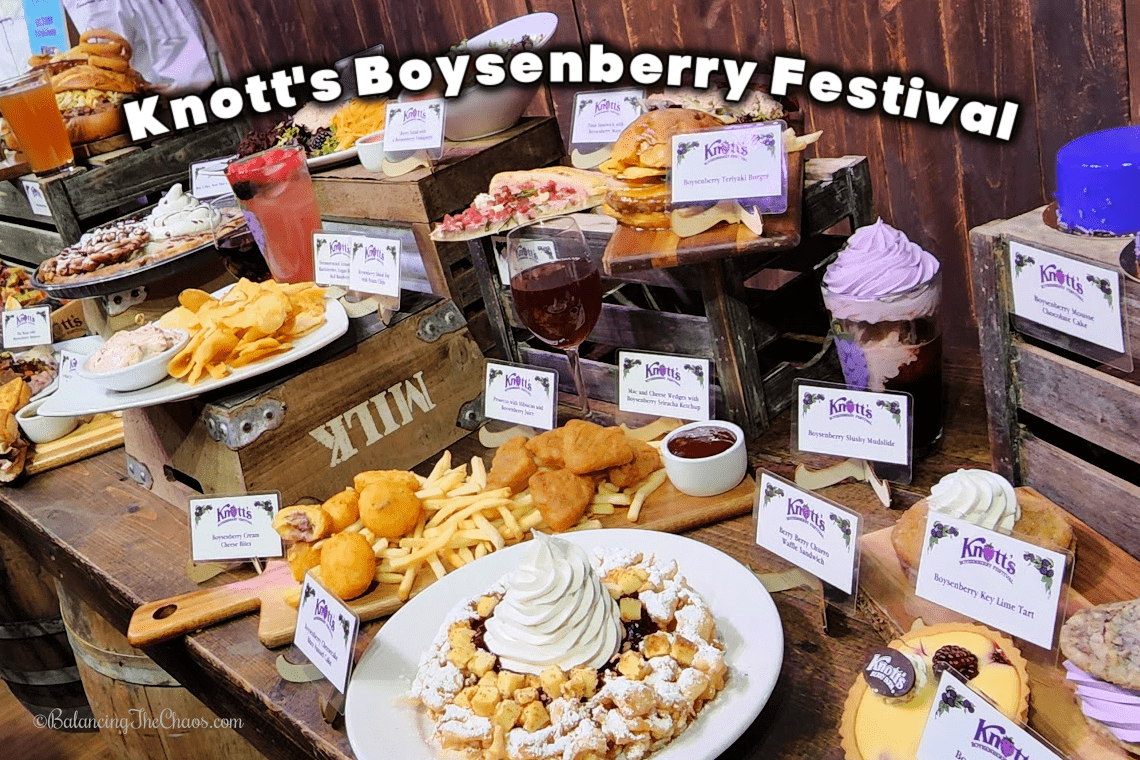 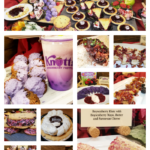 As a Knott’s Berry Farm Ambassador, I’m so excited to share the news! Knott’s is celebrating their delicious roots with the return of the Boysenberry Festival, March 18th – April 24th. Families are invited to join in on the fun during this 38-day festival that will feature over 75 new boysenberry-inspired creations, dazzling live entertainment, and family fun activities for guests of all ages to enjoy.

It all started in the 1930s with the boysenberry. Walter Knott harvested a fruit that was the result of a cross between a loganberry, a raspberry, and a blackberry: the boysenberry, named after its creator, Rudolph Boysen. In celebration of Spring, Knott’s is debuting its very own farm-made Berry Market™ Boysenberry BBQ Sauce during the widely acclaimed Boysenberry Festival.

During the festival, some of the tastiest and most unique food items will be featured during the Boysenberry Festival including an open-faced boysenberry filled donut chicken sandwich with bacon jam and arugula, pozole with a boysenberry garnish, chicken dumplings with a boysenberry wonton, and teriyaki dipping sauce, the amazing boysenberry pie bar and a decadent boysenberry mousse chocolate cake.

One of my favorite new options during the Boysenberry Festival this year is the boysenberry-filled donut open-faced chicken sandwich. It was so full of flavor. To start, the donut is a Krispy Kreme, stuffed with fresh boysenberry jam. Then they take their fantastic fried chicken, pile it on top and finish it off with this incredible bacon jam, in which I want a double helping of that and some arugula. It literally melts in your mouth.

My favorite sweet this year is hands down, the boysenberry pie bar. It really reminds me of something my mom used to make each year with blueberries. Basically, a cross between a boysenberry pie and a boysenberry cobbler. You’re going to want to order at least two!

Ready to tackle some intense Boysenberry foods? Knott’s is offering their Colossal Creations:

Be sure to pick up your 2022 Knott’s limited-edition merchandise that will be available throughout the park. I’ve already snagged the tie-dyed hoodie sweatshirt, but I’m eyeing the plaid pajama set and this year’s themed t-shirt is 22.99, which includes the limited-edition Knott’s Boysenberry Festival 2022 pin.

If you’re unable to make it to the Boysenberry Festival this year, but want to partake in the boysenberry deliciousness, you can jump on Knotts.com and order yourself a Boysenberry in a Box, take hone edition. For $49.99, you can create some of your favorite boysenberry items yourself. You’ll get exclusive 4 recipe cards along with this year’s boysenberry-inspired condiments and mixes.

If you’re unable to make it to the Boysenberry Festival this year, but want to partake in the boysenberry deliciousness, you can jump on Knotts.com and order yourself a Boysenberry in a Box, take hone edition. For $49.99, you can create some of your favorite boysenberry items yourself. You’ll get exclusive 4 recipe cards along with this year’s boysenberry-inspired condiments and mixes.

While the Boysenberry Festival is included in the general admission price, the best way to indulge in the boysenberry food items is by purchasing a tasting card priced at $50 (or $45 for season pass holders), or a special Knott’s Hotel Boysenberry Package that includes overnight accommodations steps from the park, a tasting card, parking and more. The tasting card will offer six tastings from a selection of 25 boysenberry-inspired dishes and drinks. A variety of signature boysenberry items will also be available for purchase a la carte. Tasting cards are available at Knotts.com or at the theme park.

From sun up to sundown, the Knott’s Berry Farm Boysenberry Festival includes:

As you can see, there is fun to be had for the entire family during the Boysenberry Festival at Knott’s Berry Farm. While the festival is included with the price of admission, additional cost for food tasting experiences within the event. Knott’s has extended hours on select days during the festival, March 18 – April 24 allowing guests extra time to take advantage of all of the limited-time offerings. For affordable year-round fun for everyone and to explore all the Festival fun, Season Passes can be purchased online at knotts.com.

You can check out some of the other tasting card food options here: