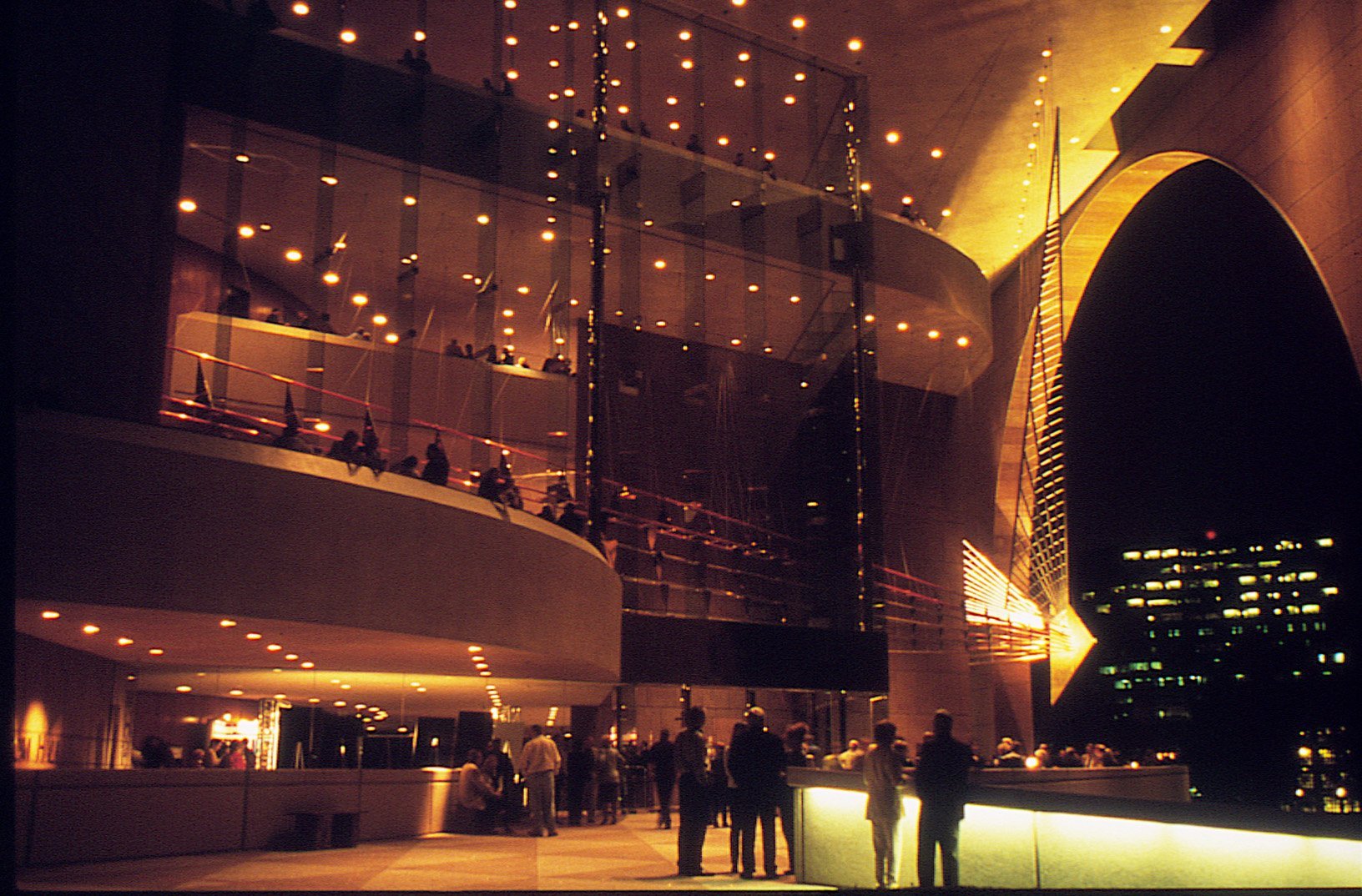 With May just around the corner, have you started planning your month yet?  I usually like to get in either a date night, or set aside some time to hang out with the girls, and Segerstrom Center For The Performing Arts’ calendar is out.  Check out their upcoming performances:

Pacific Symphony Presents:
SAINT-SAЁNS’ ORGAN SYMPHONY
May 2 – 4, 2013 | Thursday – Saturday at 8 p.m.
Renée and Henry Segerstrom Concert Hall. $25-$185.
Saint-Saëns once said he had “given everything [he] was able to give” to his Organ Symphony. Sure enough, the astonishing work compiles virtuoso keyboard passages, brilliant orchestral writing and the sound of a cathedral-sized organ – in this case, the magnificent William J. Gillespie Concert Organ. Lalo’s “Symphonie Espagnole” and Chabrier’s “Espana” add an Iberian touch to the program.May 2013 2 of 5
600 Town Center Drive Costa Mesa, CA 92626 T (714) 556-2121 F (714) 556-8984 SCFTA.org

Segerstrom Center for the Arts presents Dance:
EIFMAN BALLET OF ST. PETERSBURG (Exclusive West Coast Engagement)
May 3 – 5, 2013 | Friday at 7:30 p.m., Saturday at 2 and 7:30 p.m. and Sunday at 2 p.m.
Segerstrom Hall. $29-$119.
Since 1977, Eifman Ballet of St. Petersburg has been exploring the depths of the human psyche through dance. Fueled by the artistic vision of choreographer-philosopher Boris Eifman, the company presents mesmerizing physical virtuosity while delving into the mysteries of creativity, torment and genius. This season, Eifman Ballet showcases Rodin, an expedition set at the crossroads of passion and insanity, based on the turbulent relationship between famed French sculptor Auguste Rodin and his mistress, fellow artist and muse, Camille Claudel. Dancers inhabit the sensuality of shape and form as this tumultuous story unfolds, becoming sculpted works of art and masses of clay. The production is set to vibrant music by Rodin’s fellow Parisians, Ravel, Massenet and Saint-Saëns.

Pacific Symphony presents:
UNDER THE SEA
May 4, 2013 | Saturday at 10 a.m. and 11:30 a.m.
Renée and Henry Segerstrom Concert Hall. $19-$39.
Voyage beneath the sea to explore familiar tunes including Disney’s beloved theme to The Little Mermaid and Claude Debussy’s La Mer, his groundbreaking piece that captures the moods and colors of the ocean using the orchestra as a versatile paintbrush.  Under the Sea is part of Pacific Symphony’s Family Music Mornings which consist of fun and fascinating 45-minute concerts especially designed for children 5 – 11. Enjoy family fun time together while enhancing your child’s (or grandchild’s) love of music. Free hands-on activities related to the underwater theme are available during the Musical Carnival; 9 a.m. for 10 a.m. concertgoers and 12:15 p.m. for 11:30 a.m. concertgoers.

Pacific Symphony presents:
PACIFIC SYMPHONY YOUTH WIND ENSEMBLE 2012-13 SEASON FINALE
May 5, 2013 | Sunday at 3 p.m.
Renée and Henry Segerstrom Concert Hall. FREE.  PSYWE salutes our soldiers in a joint performance with the United States Air Force Band of the Golden West! Join the two as they close the season with an array of melodies and marches, from Berlioz’s “An American Elegie” to Sousa’s beloved “Stars and Stripes Forever.”

Segerstrom Center for the Arts presents Broadway:
FLASHDANCE (Center Premiere)
May 7 – 19, 2013 | Tuesday – Friday at 7:30 p.m., Saturday at 2 and 7:30 p.m. and Sunday at 1 and 6:30 p.m.
Segerstrom Hall. $20-$92.50.
FLASHDANCE tells the inspiring and unforgettable story of Alex Owens, a working-class girl from Pittsburgh with a dream of becoming a professional dancer. She works as a steel mill welder by day and a bar dancer at night, while aspiring to be accepted into a prestigious ballet academy. When Alex catches the eye of her boss, Nick Hurley, their romance shows her the meaning of love and drives her ambition to pursue her dream. FLASHDANCE features 16 original songs created by Robbie Roth and Robert Cary and takes hit songs from the smash hit movie’s Grammy® Award-winning soundtrack, including the Academy Award-winning title song “Flashdance – What a Feeling,” “Maniac,” “Gloria,” “Manhunt” and “I Love Rock & Roll” for a performance of a lifetime. Please note: This show contains some mature content that may not be suitable for all audiences and is recommended for ages 13 and over.

Pacific Symphony presents:
SINGIN’ IN THE RAIN
May 9 – 11, 2013 | Thursday – Saturday at 8 p.m.
Renée and Henry Segerstrom Concert Hall. $25-$185.
A symphonic night at the movies! On the big screen, a beautifully restored print of the 1952 classical musical “Singin’ in the Rain” starring the greats Gene Kelly, Donald O’Connor and Debbie Reynolds provides a visual spectacle while the gifted musicians of Pacific Symphony offer a live soundtrack to the concert hall stage.

Segerstrom Center for the Arts presents Cabaret:
BETTY BUCKLEY
May 16 – 18, 2013 | Thursday – Saturday at 7:30 p.m.
Samueli Theater. $72.
From roles in blockbuster hit musicals such as Cats, Pippin and 1776 to celebrated turns as Norma Desmond in Sunset Boulevard and Mama Rose in Gypsy, Tony Award-winning Betty Buckley is a performer whose name has become synonymous with the best of Broadway. Through acclaimed concert appearances around the world, Buckley remains a quintessential leading lady of American musical theater. May 2013 4 of 5
600 Town Center Drive Costa Mesa, CA 92626 T (714) 556-2121 F (714) 556-8984 SCFTA.org

Pacific Symphony presents:
DUKE ELLINGTON ORCHESTRA
May 16 – 18, 2013 | Thursday – Saturday at 8 p.m.
Renée and Henry Segerstrom Concert Hall. $25-$185.
No celebration of American composers is complete without mention of Duke Ellington, whose works inspired many composers and musicians of the 20th and 21st centuries. This year, Pacific Symphony will not only perform Ellington’s work but will also present the ensemble that carries his name and has been playing together in one form or another for eight dazzling decades. A shortened 90-minute version of the engagement is offered as Duke Ellington Revealed on Sunday May 19th at 3 p.m. Ticket prices are $25-$95 for this performance.

Pacific Symphony presents:
FAUST
May 19, 2013 | Sunday at 7 p.m.
Samueli Theater. $30.
Inspired by Faust (1926), Friedrich Murnau’s iconic silent movie classic, composer and saxophonist Daniel Schnyder will present music that depicts the seduction and unfortunate destruction of the human soul. Schnyder and his trio, Words Within Music, will accompany selected key scenes from the film with fully composed pieces and play musical improvisations during connecting film sequences to illustrate the protagonists  actions and streams of consciousness.

Segerstrom Center for the Arts presents Family:
THE INTERGALACTIC NEMESIS
May 31 & June 2, 2013 | Friday at 7:30 p.m. and Sunday at 12 and 4 p.m.
Samueli Theater. $20.
The year is 1933. Pulitzer Prize-winning reporter Molly Sloan and her intrepid research assistant Timmy Mendez team up with Ben Wilcott, a mysterious librarian from Arizona, to embark on an epic journey of danger, adventure and thrill. Together, they travel from Romania to Scotland, the Alps, Tunis, the Robot Planet and finally to Imperial Zygon to defeat a terrible threat to the future of humanity: an invading force of sludge-monsters from outer space known as the Zygonians. Join Molly, Timmy and Ben on an exhilarating ride in The Intergalactic Nemesis and save the world from the Zygonians.

What performances are you going to attend?  I know I would love to take the munckins to the Under The Sea event and either a date night or girls night with Flashdance!